ETSA put on a fascinating conference for its members and affiliates covering topics as diverse as the AI, venture capital, data and sustainability and the circular economy

The vibrant city of Dublin in the Republic of Ireland was host to this year's ETSA conference which saw delegates from all over Europe in attendance at the iconic Gresham Hotel on O'Connell Street.

Moderated by Charlie Betteridge, vice president global corporate accounts, Christeyns, the conference was sponsored by Christeyns, Ecolab, Jensen, TenCate and Van Moer. Very much to the fore of thinking this year were the circular economy, digitalisation, the march of AI and the move to an almost 'virtual' investment model for funding-start-ups.

Thomas Krautschneider, ETSA chairman, welcomed delegates in ETSA's 25th anniversary year. Commenting that along with the birth of ETSA, 1994 also witnessed the first Sony Playstation and that the USA then had "a cool president" in the form of Bill Clinton, that year also saw the launch of the EuroStar service, and he joked that he hoped 2019 wouldn't see the end of it because of Brexit. (Brexit, of course, cropped up again and again throughout the conference.)

Looking to the future and giving a taste of presentations to come over the two days of the conference Krautschneider alluded to the spate of start-up companies funded by venture capital firms spending several billion dollars each year on companies with an unproven record. "Just last Friday, Uber sold for US $90bn, a company that makes a $3bn loss each year."

He said that business models are based on softer platforms and are wiping out traditional businesses. "Now you see the mighty car companies are hit, let alone department stores. The world is changing and changing rapidly. The digital world is taking over bit by bit and business case by business case.

"You have to reinvent yourself, keep what is good reject the rest. Resilience is a necessity. If you don't go with your time, your time will go," said Krautschneider. "In fact, our industry is in a good position to adapt, sharing economies, and the circular economy is something we have been doing for years. The industry has made strides in reducing costs and promoting sustainability. We will continue adapt in different ways embracing AI, exoskeletons, and so on, bit by bit and I am excited to hear from the speakers which direction it will go.

"I am convinced the business model is sound and suited for the future. It is everybody's decision and obligation to do the right thing. I am looking forward to the next 25 years." 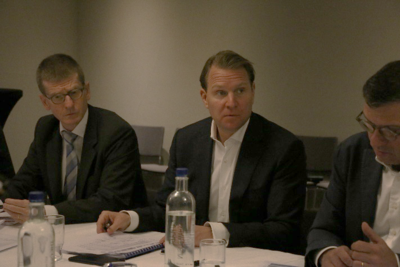 Robert Long, ETSA Secretary General made his report on ETSA projects explaining that ETSA boasts 36 members including two research centres. "Within ETSA are five networks - Laundry and Engineering; Workwear & PPE; National Associations; Communications and Networking and the ETSA Board.

He told delegates of a new ETSA image campaign focusing on millennials. "An agency has been hired to come up with a good message, such as how textile services help with sustainability and the environment. We are also addressing the issue of domestic washing and trying to convert people to using professional services." One driver for change is the hygiene risks of washing at home," explained Long.

He also pledged to improve communications by facilitating access to members' areas and to ETSA studies. Webinars are also planned, including one to illustrate the move from a linear to a circular form of economy which is, of course, paired with reuse and recycling. 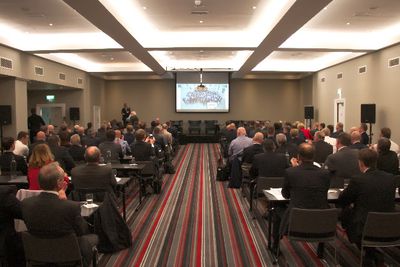 And he reassured delegates that ETSA is also addressing the needs of digital learning, investigating the sort of training needed now and in the future. "Platforms are being set up, and relevant tutorials and videos are in the making."

The gathering was treated on the second day of the conference to a powerful keynote speech, sponsored by Jensen, from John Bruton, former Irish Minister for Finance, Prime Minister (Taoiseach) and subsequently the EU ambassador to Washington. Bruton laid out the background of the problems over agreeing the 'backstop' agreement in the context of the history of Ireland and the relationship with Northern Ireland within the UK. Bruton, who has seen Ireland develop within the EU to a vibrant forward-looking country, is on record (YouTube, BrExit: UK-Irish Relations - Bertie Ahern & John Bruton, European Union Select Committee, 25 Oct 2016) as saying the withdrawal of the UK from Europe means suffering a "terrible loss".

He said it is testament to how far the EU has brought the two countries together, referencing then UK prime minister Ted Heath's first visit to the Irish republic in 1973, just two years after both countries joined the Union, and the first time a UK prime minister visited since the Republic became independent of the UK in 1922. He explained about the obstacle to an agreed Brexit, the Good Friday agreement, which sets in stone that there will be no physical border on the island of Ireland. He also commented on the negative influence of Trump in the world and warned we may need to survive another five years with him in the White House. 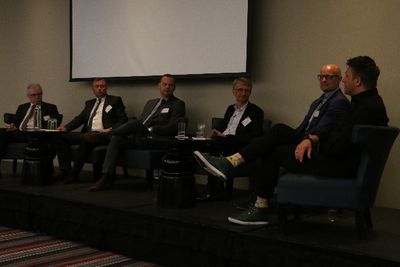 Nicklas Bergman, technology investor, spoke about emerging markets and technologies and how the tech storm is disrupting society and business.

Mads Andresen, of Inwatec, a self-confessed laundry nerd (he used to just be a nerd, he said) educated the room on a sorter machine that uses a combination of x-rays, cameras and machine learning to develop AI. In short: "The machine can be made to recognise, for example, a white uniform...take a lot of photographs, let it train for 24 hours, maybe a week or so, and the machine can tell the difference between a pair of white trousers and a white towel or a sheet." Inwatec can also combine RFID to drill for more data.

Ten Cate's Marcel Willems and Sioen's Christiaan Dierckx, presented a case study where all relevant players in the value chain (fabric manufacturer, garment maker, laundry) worked closely together to find a sustainable solution to meet the demanding requirements of the end user.

Uwe Horstmann, start-up investor and expert on digitisation, passed on his tips for building the next generation of e-commerce, saying: "For venture capitalists, return is minimal, success is not guaranteed...Stop using buzzwords, never use 'block chain', just work with the algorithms and data. That's it." 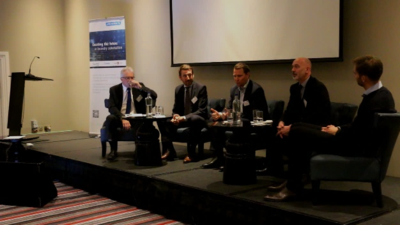 Working together can promote best practice and bring valuable synergies and savings, concludes the 'Value chain' panel. The panel on the second day worked around the challenges and opportunities textile services are faced with, addressing staff shortages, migration, training, automation, sustainability, costs and procurement among other issues.

Creating better working conditions for workers was one of the main topics. As Celtic's Campbell said: "We are competing against other companies to attract new employees in a seasonal business. We must consider closely offerings that can make a difference when recruiting new employees. Even providing basic conditions where employees can charge their phones and access free wi-fi can make a difference. Meaningful induction training is vital in demonstrating the value of new employees. We may keep them for six months, but not for life"

Sustainability is also a hot topic that was discussed during the presentations and panel discussions. From working with more natural green energy sources to working with logistics where we could reduce the number of vans.

The textile services industry needs to adapt constantly to the changing conditions of our current times. Digital complexity, environmental concerns, the rise of automation, and the growing number of start-ups are all developments which affect and challenge the industry. With every challenge, there are also opportunities. 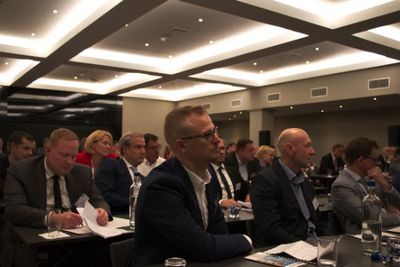 Coming to terms with these challenges is no longer optional; it is a necessity. Reducing microfibre release in the laundry process and reducing plastics use are paramount. But like with automation, price is often still a big driver.

The CEOs also concluded that adoption of new ways of doing business in the digital age need to be embraced, whether 'virtual' investment for start-ups or 'acquired' learning for robots and humans. We have to go forward with eyes open.

After 25 years of ETSA we are still driven to help our members explore, challenge, adapt and discover new opportunities. To find out more about ETSA members including textile rental companies and suppliers, see www.textile-services.eu/our_members